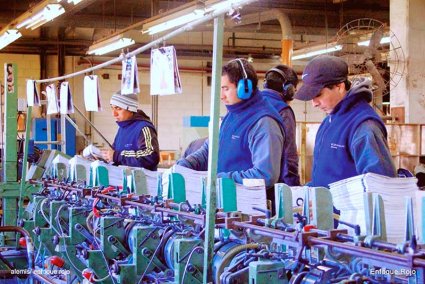 In the suburbs north Buenos Aires, we have made huge gains in defense of our work in the face of the factory closure

Saturday at dawn, we, the workers watch over the plant, guard the floors, walk around, control everybody’s movements, and send each other text messages. For weeks, we observe them steadily. We know the imperialist bosses maneuver constantly, setting barbed wire around the factory, placing bars on doors and windows, attempting to take away the raw material (what is prevented by the workers), and diverting the production to other workshops. These are all attempts to intimidate and divide us, thus creating a climate of terror.

Nonetheless, we participated more and more in different actions, such as the blockage of other printing factories, whereafter other workers stopped by the factory to learn what was going on. We say, “Families in the streets, never again,”and we carry on our struggle.

Saturday at dawn the rumors start to spread.

Administrators and staff begin to spread the word that Monday the factory will not open, that Donnelly is leaving the country. Far from becoming intimidated we grow stronger, spending the entire Sunday discussing how to take action. We know the vultures and that is why we evaluate all the possibilities.

In spite of the brutality exerted by this American multinational, on Monday beginning at 5 am we waited at the doors beside the Panamericana to which we’ve return many times to voice our demands or to support the workers of Kraft, Lear, and for the strike of November 20th and the strike of April 10th.

At the closed factory doors, a simple note, Donnelley explaining that it is leaving the country, leaving 400 families in the streets and that workers should appeal to the judge the indemnization caused by the bankruptcy. The misery of these capitalists that do not show their faces boils our blood. But our minds are calm. We wait for the 7 am assembly, where more than 300 workers have gathered.

Our organization is very strong. We discuss, agreeing that we will not allow the closure of the factory. If the bosses leave, we will be taking over Donnelley.

Who better than we, the workers, to carry on? The leadership of the union is present. We ask them to stop graphic workshops from printing the products that Donnelley makes and we demand a general strike if there were layoffs. The blockage was done, but the strike never happened when the layoffs started (something that many co-workers demanded of the union when they joined the assembly).

The provincial labour ministry calls a hearing at La Plata city. We voted to await an answer from the Labour Ministry in the face of the denouncement that the union would make. We do not trust them. We know them for their actions with other struggles, such as Kraft, Lear, and Gestamp. We know the game of the union and on what side they stand, but we also certainly know the illegality in which the company is acting, and we will take advantage of that.

The hearing occurs at 4pm at La Plata City. Should we, the workers, walk into the abandoned plant before the hearing for our assembly? What to do? The debate goes around all the different activist sectors, themselves discussing all the possible alternatives. It is our work that is at stake—our livelihood. The women committee is part of the debate: they paint the signs denouncing Vergara, the executive manager (who lives well-to-do life in a wealthy neighborhood).

The closing of Donnelley was reported by national media outlets, meanwhile “Robben” Lopez Torales’ gendarmerie was stationed along the Panamericana. Divided, only by a couple of votes, we decide to wait until after the hearing.

The bosses’ lawyers were not able to explain absolutely nothing. The illegality of the multinational can not be defended even by the lawyers, who claim to have broken ties with the company. It has been announced that the company has filed for bankruptcy. Something untold that a multinational like Donnelley, the most renowned printing company in the world, filed for bankruptcy. Neither the bankruptcy nor the “disappearing” of the company intimidate us. The labor ministry is forced to dictate compulsory conciliation. Christian Castillo, deputy of PTS at the FIT, and Funes (FPV) were present during the struggle.

On the way back from the hearing, more than 300 workers discuss the next step. At 10:30 everyone raises their hands—it is unanimous. We must enter the factory. We will wait until 6:00 AM when the Ministry of Labor is scheduled to to announce the noncompliance of the company. We knew what we had to do, where we had to go, how to do it. We prepared for it. A thousand and one times times it was discussed as an alternative before the layoffs, or before a shutdown. During the day the friends at other graphics companies like PrintPack, World Color, AGR, Morovillo, IPESA, Cedinsa, and friends from Lear, Kraft, Fate, Gestamp, among others, had passed the measure. How could they not pass the measure if we were in every fight that they were in? The assembly finished, recounting the final medical report of our friend “Pollo,” who was hospitalized with extensive burns following a brutal accident. Donnelley’s fight is Pollo’s fight, like Pollo’s struggle is the struggle of all the workers at Donnelley.

Proud Workers to Turn on the Machines

It is Tuesday at 6:00 AM and the vultures are gone. The workers get together at 7:40 AM at the door of Donnelley to carry out the resolution voted on hours before. Meanwhile more than 40 co-workers are entering the factory. The factory is being guarded by a security company. We finish the assembly and decide to enter. Our co-workers open the main entrance door. We know in our history of struggle that this moment signals a new stage. Without the boss watching over the workers, we walk around the factory the American multinational has abandoned.

Within two hours we were discussing; “if the bosses don’t want to produce, we will do do it ourselves.” We take our working positions and divide tasks to carry on. The first lines start working at 10 am. “We don’t need managers to function,” we tell the media outlets. We will not allow our families to go hungry. We began to contact clients that the company abandoned. “We are the workers of Donnelley. The company left and we are going to start producing. We want to keep serving you.” That same afternoon, we have the first finished products, among them the magazine Gente, Para ti and Billiken from Atlantida editorial.

The commercial court records the fraudulent bankruptcy of Donnelley and appoints a trustee. We all distrust the court in the same way we distrust the Ministry and the Government. We know our struggle will face gigantic and powerful enemies. However,we have what is required, what we fought for over many years: a strong organization of workers and the coordination achieved with other sectors also in struggle. Immediately we get together with the Lear’s workers. We organize a meeting for this Saturday, August 16th, to discuss a plan to fight. We also have Zanon’s workers experience, an extraordinary example of the struggle for worker control and statization.

We arouse within at the heart of the industrial north, in front of one of the most prominents capitalist symbols, the Ford factory. We will fight for statization and worker control. We want the state to expropriate and take over the company that we, the workers, propose to manage. Our goal is a cooperative of workers, where we will be depending on the market swings. We want to be workers, with a salary, and we know that a factory like this one can be put at the service of the people. We proposed this on Wednesday, to minister Tomada, contrary to the fake statements that pro-government media outlets are saying that we want investors. We want statization and worker control. This is why we fight. Provincial deputy from PTS, Christian Castillo, presented the project for the expropriation of the factory.

To support this fight, we insist that the Union to call for a general strike with a mobilization of other graphics companies from CABA and PBA. We say, “families in the streets, never again.” We will carry on. A new stage has begun for Donnelley’s workers. These are days of struggle, historic days for the workers.