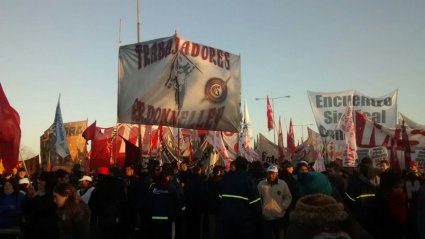 Millions of workers went on strike around the country

Member of the Argentine National Congress Nicolás del Caño and the member of the Buenos Aires Province Congress Christian Castillo of the PTS in the Left and the Workers’ Front (FIT), took part in the road blockades during the national strike. “Millions of workers went on strike around the country. Most of them don’t belong to the unions that called the strike but want to send a strong message to the government and the bosses”

Christian Castillo took part in the rally along the Pan American Highway with other PTS leaders and workers from Kraft foods, Lear, RR Donnelley, Pepsico, FATE and other Left groups and community organizations. Castillo said “Although Moyano [the head of the CGT union] called for this national strike without organizing workers or demonstrations, it became massive”

And he continued “A big number of factories struck, even Lear and Volkswagen, where the bosses had to designate this day as a day of rest because workers didn’t show up, whether or not union bureaucrats [referring to Pigannelli] like it. The few subways and buses that are running are almost empty. The workers and the people were able to express their dissatisfaction with inflation, layoffs and the high income taxes”.

Nicolás del Caño participated in the road block at Pueyrredón Bridge during the strike with the laid-off workers from Shell, Calsa and Honda, PTS leaders and from the Coca Cola shop-steward committee, from SUTEBA (Teachers’ union), LAN’s (Airline) shop-steward committee and other leftists groups. Del Caño pointed out that “it’s the third national strike the president Cristina Fernández has to face. Although the bureaucracy in the trade unions took a long time to call for this strike, despite the fear of more layoffs in the factories, and that other important unions did not participate, millions of workers wanted to be heard and protested against the government and the bosses”.

Claudio Dellecarbonara, a PTS leader and subway delegate in Buenos Aires also participated of the strike with his fellow workers and was part of the rallies. Other PTS leaders that participated in the demostrations and road blockades around the country were Hernán “Bocha” Puddu, metalmechanic industry worker and former candidate in Cordoba province; Raul Godoy, Zanon worker in Neuquén province; provincial senator Noelia Barbeito in Mendoza, among others.