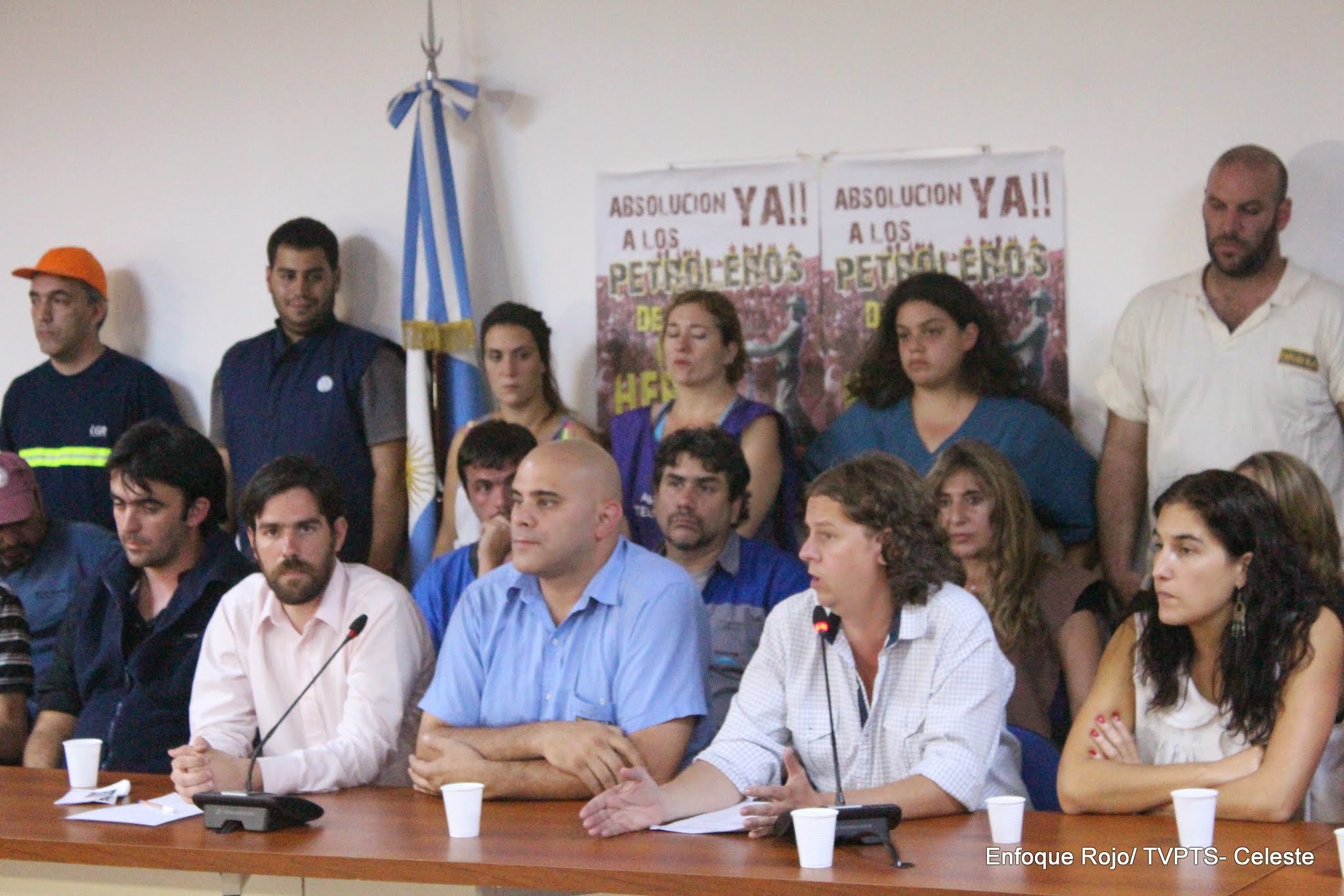 As soon as the roadblocks were finished, strike leaders within the labor movement and political leaders from the PTS, who have actively participated during the day of struggle, gave a press conference before Congress, with the participation of the national deputy from the PTS in the FIT (Left and Workers’ Front), Nicholas Del Cano, who had been present during the roadblock of the Pueyrredon Bridge, and Buenos Aires provincial lawmaker from PTS in the FIT, Christian Castillo, who had been present during the roadblock of Panamericana. Also participating in the press conference Martin Killing, a Donnelley worker (printing industry), denounced the arrest of his workmate Jorge Medina during the repression at the Panamericana. Many journalists from different television networks and newspapers attended the conference to hear the voices of the Left, which performed an outstanding role during the strike.

Javier "Poke" Hermosilla, from the “comisión interna” (a shop steward commission) of Kraft Foods, talked about the need of a serious plan of struggle that should be “called by the five trade union confederations, with increasing actions leading to the general strike; this is the only way workers can express their unrest in relation to the low salaries, austerity measures, devaluation, and precarious working conditions.” In the face of this isolated action called by the union bureaucracy, Hermosilla emphasized that "from the ‘National Conference of Fighting Union’ we will meet to evaluate this day, so to demand again, not an isolated action, but to make this part of a broader plan of struggle for defeating austerity measures." Meanwhile, Claudio Dellecarbonara, rank and file delegate from Buenos Aires Subway, referring to the strength of the strike on the subway, said, “we must denounce the presence of some thugs of UTA, but the six lines and the Premetro did not strike because of these people, who belong to a union that has nothing to do with the subway workers and does not represent them. We strike because it was the decision of the majority of the workers not to attend their duties.”

Finally, Christian Castillo, provincial deputy of Buenos Aires for the FIT, who participated from early morning at the Panamericana roadblock, evaluated the activities carried out during the day: "I believe that [after this national strike] every worker who is fighting for his/her wages or is unhappy with the agreement signed by their union is in a much better position to fight. This is clear because he/she feels it is not his/her individual demand but a collective one, of the entire working class.”

He also underlined that the left had been demanding for a national strike, so "When they call a strike we strike, but we assert our political independence. We say that we strike not thanks to Barrionuevo (leader of CGT Azul y Blanca), but despite the fact that he has been among the organizers.” The provincial deputy also highlighted the serious mistake of Michelli from CTA, "for not participating in the roadblocks, opposed as he has done before, and for agreeing to the of Moyano and Barrionuevo’s methodology of a passive strike without protests or demonstrations.” In regard to the political context in which the union bureaucracy called the strike, the lawmaker noted “if something can be criticized in this strike it is its delay, because teachers underwent 17 days of strike, and we have been suffering devaluation consequences for the last 3 months. Our obligation was to be in the streets and to continue to raise the need for actions so that the crisis does not have to be paid for by the workers.” During the day of strike the roadblocks suffered the attacks of Jorge Capitanich (Cabinet Chief), the ruling party and the Opposition, which was echoed by several media outlets. The provincial deputy, Christian Castillo, stressed the virtue of the roadblocks, allowing workers to show the development of the fighting unionism, who participated actively in the strike, and who voted the strike in assemblies, revealing that this sector fights for the political independence of the working class. In turn, Castillo highlighted that the roadblocks allowed the workers with precarious Jobs and no union rights to take part in the strike.