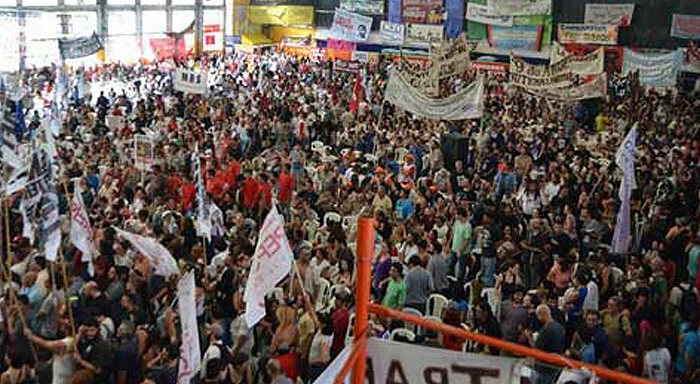 On April 10th, the combative unionists are calling to mobilize with road blockades and raise an independent programme.

With a few days left before the strike called by the CTA and CGT oppositional factions, the working class is preparing its second national strike against the Kirchner government. We, the PTS, as part of the National Conference of Fighting Unions and the FIT (Left and Workers’ Front), are convinced this is an opportunity to lead a massive demonstration against bosses and the government. We are calling for a strike with a political program independent from that of the Union leaders who called it. The bureaucrats from Moyanos’ CGT, the ’Blue and White’ CGT of Luis Barrionuevo, and CTA of Micheli, do not want to defeat the austerity program. As we saw in the strike of November 20, 2012 in Argentina (in which a big portion of working class mobilized with actions in streets and road blockades), they are only trying to bring people closer to the pro-bosses opposition of Massa, De Narváez, Macri, De la Sota or the FAP of Binner, who carry out the same (or worse) austerity plans as the government. These people have done nothing about the devaluation in January, which took away a significant portion of our salary. This strike was called many days later, after the huge Buenos Aires province teachers’ strike. Up until now, it was the most important workers’ action and had the widespread support of the people. As part of the National Conference of Fighting Unions, we are calling for a strike with road blockades and with a programme of our own that should be voted on in assemblies at each workplace, for all the workers’ demands, whether they are permanent, temporary or subcontracted workers, unemployed or retired; and for the demands of the poor and the youth. We are calling for national struggle until we defeat the austerity plan. The government has decided to pursue two strategies. On one side, it wants to calm the markets and hold up the salary negotiations with the officialist unions as a success. Together with trade unionists like Antonio Caló, Andrés Rodríguez from UPCN or Gerardo Martínez from UOCRA, they are attempting to convey an image of stability while the attack against the salary is still running. On the other hand, the government attempts to undermine the April 10th strike operating with Transport unions’ such as ‘Unión Ferroviaria’ and UTA. Official union leaders have already adhered to the campaign against the strike, with an effort that is never given when they have to confront layoffs and salary ceilings. But the teachers of Buenos Aires province have demonstrated the government can be forced to retreat. With 17 days of strike and a true rebellion of the rank-and-file in one of the most important unions, and in the principal province of the country, they have struck a blow against Scioli (governor of the province of Buenos Aires) and Cristina Kirchner. They defied the mandatory arbitration and the judge’s (a participant in the dictatorship) order who attempted to criminalize the strike. The bureaucrats of SUTEBA (union of the teachers of the province of Buenos Aires) of the officialist CTA (led by Hugo Yasky) had to step up and take the lead in the teachers struggle or they would have been left behind. The national government and the peronist governors were forced to back off from the salary ceiling of 25% and deliver a raise of 31%, although still far from the annual inflation rate of 50%.

The plan lauded by big business

The president found another way to impose an austerity plan. The removal of subsidies to the water and gas companies in the capital and the province of Buenos Aires made utility prices spike. There are reports that indicate increases of up to 400%. The austerity will also come with an increased external debt which sooner or later, they will seek to unload on our backs. To increase the shrinking reserves of the Central Bank, the government negotiates to pay the Paris Club, YPF took on a new debt of $1 billion and the minister Axel Kicillof is desperate to get loans from even the investment banks, an emblematic sector of the international finantial capital. On the 32nd aniversary of the Malvinas war we are hearing about embarrassing agreements and bribes with British Petroleum for Cerro Dragon, all under the blessing of Kirchnerism. This is the plan that is praised by big business and the opposition of the bosses, the foundation of the bourgeous consensus that empowers the government against the workers and the poor.

The campaign for “public safety” and the promotions of “tough on crime” policies of all the bosses parties and the media led to the middle class “taking justice into its own hands” and attempting to lynch supposed thieves and killing a young worker in Rosario. The government says that this is not the preferred “method” but its own secretary of safety says publicly that “the people were fed up.” This is the same official who furiously attacks the methods of struggle of the working class, the roadblocks and the MPs of the FIT, Cristian Castillo and Nicolás del Caño. Moyano and Barrionuevo of the CGT call for a strike “against crime” and “drug trafficking” echoing the campaign of the bosses opposition. The PTS condemns the lynchings and rejects the stigmatization of poor youth. The so-called “crime wave” is the result of the dealings of those in power, the judicial system and the police that shelter, encourage and are part of the narcotrafficking, auto theft, human trafficking, and every other crime imaginiable. Against those who try to divide and put workers and middle class against the poor and the youth who have been pushed into marginalization –there are today one million young people who can’t find a job or attend school–the only solution is the persistent fight for jobs, health care and education for all.

April 10: We strike with an independent program

We call for workplace assemblies, for road blockades, and for an independent program. Against the austerity plan, we demand a national fightback for a basic salary equal to the cost of living and salary increases indexed to inflation. No more layoffs, suspensions, or labor flexiblization. No spikes in the prices of the utilities. No payment of the external debt. The strike is also an opportunity to demand, in the streets, the immediate release of the oil workers of Las Heras and the freedom of all activists. The campaign in defense of the imprisoned workers is growing throughout the country and the world, with the support of intellectuals, workers, students and other popular movements. Against the demonization of poor youth, we say no more ‘get tough on crime” policies, no more police brutality, and no more lynchings. Meaningful work for all youth, permanent jobs and no more unreported work. The state must guarantee scholarships, school lunches and transportation for students. The government uses all its strength to discredit the strike, seeking to equate the anger of the workers over the austerity measures with support for the politics of the organizers. It will be a struggle to expand the strike to the unions that didn’t sign onto it, because of their servility to the government, and to make the strike active, with road blockades and demostrations, within the unions that, while signing on to the strike, did not promote the mobilization of the workers. The divisions of union bureaucrats who respond to political interests foreign to the interests of the working class, whether because they support the government or the bosses oposition, can’t be enough to prevent a powerful and united strike this April 10th. Let’s show in the streets that we are willing to fight to make the capitalists pay for this economic crisis.