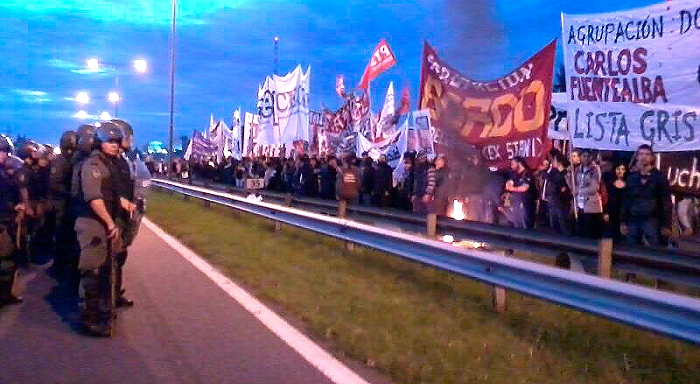 Big strike against the cuts

The strike on April 10th was called by both the CGT (Hugo Moyano and Luis Barrionuevo) and CTA (Pablo Micheli) which meant a national statement from the working class against the cuts. It was a huge national strike with mass support in the workplaces.

This second national strike against KIrchners’ government had even more support than the strike on November 20th 2012. There was a total work stoppage in transport and service sectors, where the unions that called the strike are dominant. In the industrial sector, in many factories where the official unions are dominant, the workers also went on strike. In Buenos Aires northern suburbs, the strike took place in food factories such as Kraft, Pepsico, in Pilar’s industrial park, Procter, WorldColor and Unilever factories, automobile parts factory Lear, graphic industries Donnelley and Printpack, also soap industries like Alicorp in La Matanza (Buenos Aires west suburbs). In Bahia Blanca city (South of Buenos Aires province) the petrochemical complex had a complete stoppage. In Rosario (Santa Fé province) metal industrial area (where the workers of the Liliana factory have recently been fighting a tough battle), many factories didn´t work. In Siderar (a huge steel factory), more than half of the workers were on strike. In the Renault factory in Córdoba province and the Ford factory in Pacheco (Buenos Aires northern suburbs), the bosses decided to establish April 10th as a non- working day, because they knew the stoppage would be total.

In Buenos aires city the strike in the Subways was significant, and the workers did not go to their work places en masse. Thousands of teachers also went on strike in the whole country despite their kirchnerist Union leaders who were against the A10 strike. The unions, shop steward committees, and union representatives who take part in the ESC (Combative unions Meeting - Encuentro sindical combativo) together with other political organizations, especially the PTS, developed assemblies in the work places and promoted the roadblocks in order to guarantee the strike where the official unions’ bureaucrats didn´t call to take strike action.

The Chief of Cabinet, Jorge Capitanich, attacked the strike saying that people couldn’t get to their Jobs because of the lack of transport and the roadblocks, desparaging the huge support the working class gave the strike. But anyone who knows the strike history of this country also knows that if you want to get to work, you can find a way. Capitanich should also remember that when the Argentinean working class decides to fight, they do it with determination. And this is what they have started to do. Most of the workers joined the strike freely because we have more than enough reasons to do so: the devaluation is taking away a big part of our salaries, the government wants to put a ceiling on the salary negotiations, 35% of the workers have precarious jobs, and most of the retired earn $2.700 pesos (approximately).

The roadblocks and picket lines were able to convince thousands of workers. This historical method of struggle of the international and national working class is encouraged by the PTS and other left organizations, from the ESC and many shop steward committees and unions. Many picket lines helped the precarious and outsourced workers (the most vulnerable sectors, under the bosses’ pressure, who threatened them with possible cuts to their salaries), providing them with an ‘excuse’ for not turning up to work. They were also useful in making other voices heard, as an alternative to the union bureaucrats and for making the strike active in significant workers’ sectors.

Sergio Massa and Mauricio Maci, from the opposition had previously condemned the strike. But on Thursday there were neither politicians who are on the side of the bosses nor media that did not argue against the roadblocks. The government decided to repress the most important roadblock on the Panamericana highway (Buenos Aires northern suburbs). But they couldn’t stop the roadblocks taking place; the union representatives from Kraft, Pepsico and Donnelley factories, and the deputies like Christian Castillo, from PTS in the FIT (Left and Workers’ front), among others, denounced the cuts imposed by the government, demanded a battle plan from the union federations CGT and CTA and demanded the acquittal of the oil refinery workers from Las Heras.

The radical sections of the working class were at this roadblock and others that took place, Puente Pueyrredón (Pueyrredón Bridge, in the south of Buenos Aires), on the west highway (Buenos Aires suburbs), in La Matanza (west suburbs), in Pilar Industrial Park, on Buenos Aires/La Plata highway, in Rosario (Santa Fe province), on route 66 in Jujuy province, in Mar del Plata port, on Mendoza province highway , on the Centenario Bridge in Córdoba province, on route 7 in Neuquén province, in front of the Zanon factory and then in the mobilization with Aten union. In all of them, the PTS provided the leading columns and our leading militants in the factories were key to promoting the participation of the workers; which was a distinctive feature of the roadblocks. The media had to show this new reality of a working class sector in which the left is starting to have a strong influence.

A new mood in the working class

The right-wing turn of the government was able to create a bourgeois consensus, because this orientation includes devaluation, an increase of the transport and utility charges, suspensions and layoffs, compensation to Repsol and a new indebtedness with the international credit organizations. The right-wing stage was set with the campaign against insecurity, with a policy of “mano dura” (increased police repression), promoted by both pro-government and oppositional polititians. This led to a situation in which the middle class sectors had the confidence to carry out a fascist method of lynching, directed at thieves in some cases, and in other cases, those who they considered suspicious.

The April 10th strike is the first big working class action that strongly opposes the government offensive of cuts and their right-wing turn. The huge strike of the teachers in Buenos Aires province was a foretaste of this situation. This national strike is showing overall, a change in the mood of the working class, anticipating that the workers’ struggle will probably multiply. The official bureaucracy from Calo and Yasky responded badly, as they went down on their knees to a government that only offers cuts, when thousands of workers turned their back on the government on April 10th.

Moyano, Barrionuevo and Micheli (who called the strike) don’t want to fight until we defeat the program of cuts. They called for an isolated measure, and when they weighed up the results they did not commit to further action. These leaders want to use the strength of the working class to support one of the bosses’ opposition politicians. They are comfortable supporting right-wing polititians, such as Massa, De La Sota, Macri, or Hermes Binner.

We are facing big opportunities for the working class left and the Left and the workers’ Front (FIT). The great election for the FIT on 2013 has already shown that hundreds of thousands of workers are opposed to the government, and they choose a class independent alternative. Now, the strike confirms the strategic importance of the unions in our country and the rise of workers organizations in the national political life, despite the limits imposed by the bureaucratic leadership.

The perspective for developing the working class and revolutionary left depends on understanding these conclusions. We propose promoting the FIT as a tool of political independence for the working class, but it must be combined with carrying out a policy to recover the unions that are in the hands of the bureaucracy, and initiatives for joining combative sectors as in the case of the ESC (Encuentro sindical y combativo/ Combative unions’ meeting)

We cannot restrict our policy to just political agitation, ignoring the importance of developing class conscious currents in the Unions; that would only lead to electioneering. The same applies to restricting ourselves to the trade union struggle; it only leads to sindicalism. Our strategy is defined by linking these fights with a political program and methods of action that build a perspective of class conscious independence for the working class. This perspective includes building a mass revolutionary party that gathers the best of the workers vanguard, and that proposes to fight consciously for a workers government.

Among the possibilities of a workers’ united front, we can encourage combative methods of struggle when the union federations call a strike, but still developing a political program of our own, as we did last Thursday April 10th. We were able to unmask the policy of the organizations that called the strike, and gather together the combative sectors, as we already did in Atlanta stadium with ESC. The return of the unions shows the potential of the working class, if these organizations were in the hands of the Left, they could develop working class aspirations with the objective of defeating the cuts.

For all this, we have to fight to conquer more positions in the main working class battalions. This is about fighting for a national battle plan and all our demands. It is mainly about raising an alternative so that the combative organizations that have been recovered from the bureaucracy can promote a program of rank and file unity with the poorest sectors of society, with a perspective of the general strike to defeat cuts, and for the capitalists to pay for the crisis.