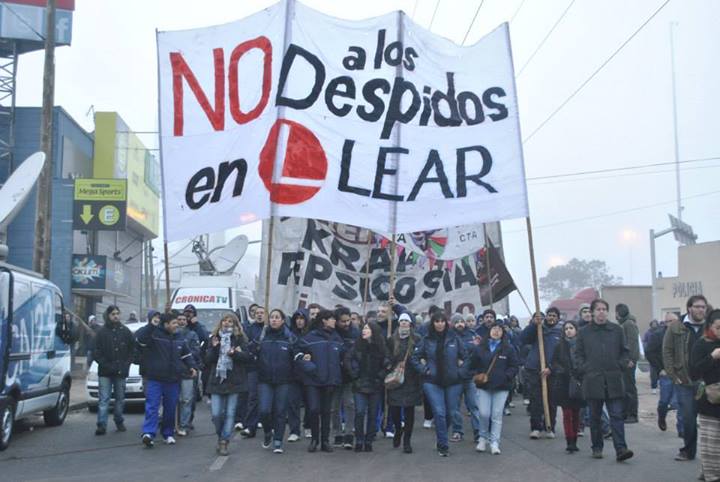 LEAR: Mass firings and layoffs in the automotive industry.

Despite the Argentine government’s announcement that they are reactivating a line of credit to the automotive industry, last Friday saw massive firings at the auto parts manufacturer Lear, in Pacheco. Meanwhile, a third of the plant’s workers were laid off, with the additional problem that for a period of 30 days starting last week, the laid-off workers will not receive any type of remuneration.

This situation is taking place despite the fact that at Ford, which is the only buyer of the electrical cable bundles that Lear produces, production remained steady during the past year, and they are expecting an increase starting in July. It turns out that Ford is importing a portion of the cables they normally buy from Lear from Central America and Europe, while the plant in Pacheco is seeing firings and the lay-off of 200 workers without severance pay. In other words, workers are fired, laid off, and thrown in the street while a North American monopolist imports the same materials from other places, not only hurting workers but also making off with government funds in the process. All this is done with the inevitable complacency of the state bureaucrats.

In the height of cynicism, this North American enterprise selectively laid off the most pro-union workers, accusing them of having a “low level of performance” when they are largely workers with years of experience, all while this same factory has another 30% of its workers idle.

In regard to the lay-offs, the Ministry of Labor, in a report on June 2, already asserted that these lay-offs were illegal because the company never gave notice of the existence of a crisis, as is mandated by law as a prior step to massive lay-offs. It also stated that in accordance with the law, the company should not put them into effect, but did not explicitly direct the company to comply with the report. The Automotive Transport Mechanics’ Union (SMATA) called for the same thing, as they had not received said notice up to now, another factor which would invalidate the illegal lay-offs. If these lay-offs continue today, it is because of this totally irregular situation, now aggravated by the firings which also were not preceded by notice of a crisis in the company. This is because Lear could never demonstrate any crisis, given that the company had $16 billion in world-wide sales last year.

Faced with this situation, we demand the immediate reinstatement of all those fired and the end of lay-offs without pay. We call on all those in solidarity to join us in this fight.