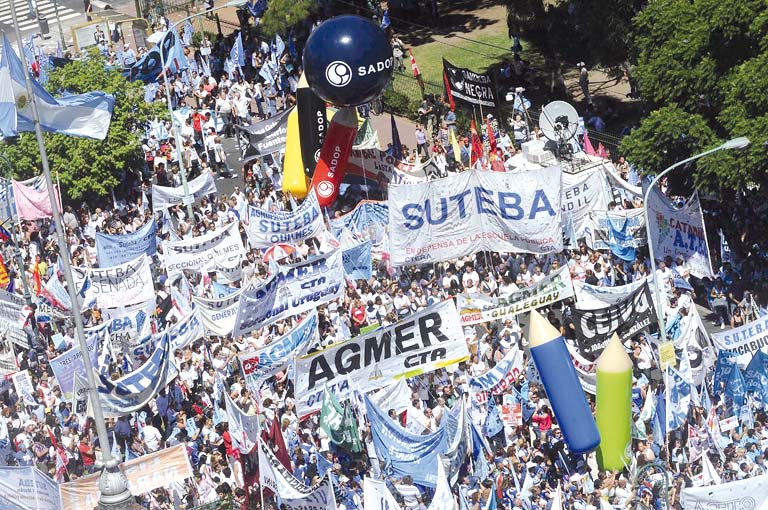 The teachers’ salary negotiations are going to set a precedent. If the government’s wishes become reality, it will be the first step toward imposing a cap on wages for all collective bargaining. But for the working class, it is our first battle against a salary ceiling. The bureaucracy that leads CTERA, part of Hugo Yasky’s CTA goes back and forth in negotiations with the government, without calling for real actions yet. They say they want a 30% salary increase but the government offers something between 23.5% and 25% and in increments. While other teachers’ guilds in the CGT of Antonio Calo ask for a minimum wage of 5,500 pesos, far from what is necessary to cover the cost of living for a family. The anger comes from the rank and file. There was already a national teachers’ convention from the opposition and meetings of delegates from the opposition in SUTEBA from Buenos Aires province and other places around the country such as Tucuman. There is where we can measure the mood and willingness to fight: actions are planned and voted on and it is decided to demand the bureaucracy in the CTERA a national plan to fight for a minimum wage of 9,000 pesos and don’t start classes on March 5th. The teachers in struggle need the support of the whole working class. The fight against the wage ceiling won’t be easy. The government’s answer is clear. In Santiago del Estero, teachers were violently repressed by the police. In San Pedro de Jujuy, seven municipal workers from the SEOM (Municipal Workers Union) were detained, beaten and had their houses searched as a result of their fight for permanent employment and against labor instability. The pact against salaries is the favored weapon of a government that went from a discourse of “never less” to an austerity plan. This pact is supported not only by Kirchner supporters but also by those self-proclaimed opposition leaders. The FAP (Frente Amplio Progresista) of Binner in Santa Fe and the right wing Peronist De la Sota from Cordoba look to impose a salary ceiling below the real inflation rate. Even with a new consumer price index released by the INDEC, the government is not going to have any consideration towards workers. This consumer price index (which is still not quite accurate) gave a 3.7% increase for January revealing an annual inflation rate of 50% or more, while the government expects to top it at 25% for the negotiations with workers. The index was increased only because the IMF insisted on a more realistic index. Setting a cap on salaries is not the only plan against workers and the masses. The increase of the interest rates reveals a recessive plan unfolding. Many industrial sectors, such as auto part makers or milk producers, are announcing layoffs and furloughs. La Serenisima, one of the country’s largest dairy companies, recently announced the closing of one of its plants in Burzaco. Further, the government is about to reach a deal to compensate Repsol after the nationalization, and the so called Railway Revolution started by the minister of transportation Randazzo, ended up in a giveaway to the companies and the bosses Roggio and Romero.

For a National Meeting of Militant Workers’ Organizations

Class conscious and militant sectors have the obligation to promote solidarity with the teachers and all the struggles now taking place, and must create an alternative in the salary negotiations to assure they are unrestricted and without any caps. The teachers that met in a national conference in which they decided to demand a plan to fight from the CTERA can be the example to call a National Meeting of Militant Workers’ Organizations. A meeting promoted in unity and democratically, with clear independence from the trade union bureaucrats, the government and the bosses in the so called opposition to further the alliance of the vanguard and to demand the unions a nationwide strike and a plan to fight against any salary pact and the austerity plan. This conference could be organized by the opposition in the SUTEBA, Neuquen’s ATEN, rail workers from Haedo that are in the opposition and Pollo Sobrero and the members of the opposition against the supporters of Pedraza in the rail workers trade union, also the municipal workers in Jujuy that follow Perro Santillan, the ceramic workers from Neuquen with Raul Godoy and the leaders of the Ceramic Trade Union, Marcelo Morales and Chicho Navarrete, workers from the Rio Santiago shipyard Miguel Lago and Jose Montes, the shop steward committee in Kraft and his secretary Javier “Poke” Hermosilla, and the shop steward committee in Pepsico, the class conscious trade union delegates like Claudio Dellecarbonara, the metal workers from Liliana, the shop steward committee in Donnelley and the committees in the print shops in which the left leads, the mechanics in Lear’s shop steward committee and the class conscious delegates in SMATA, the shop steward committees in the Garrahan and Castro Rendon Hospitals, Kromberg workers and activist workers from the Industrial Park in Pilar, shop steward committees in IOMA, Economy Ministry, INDEC, university professors in AGD, among others. And of the parties in the Left and Workers Front will be of course among the main promoters of this national workers conference. In this conference we must advance a plan to achieve our demands: a minimum wage equal to the cost of living and tied to the real inflation rate, the prohibition of all furloughs and layoffs, the distribution of work hours without wage cuts, an end to outsourcing and hiring “off the books” and to convert all precarious contracts to permanent positions, for committees of workers and consumers that oversee prices. Against the external debt payment; an end to police repression, dropping of charges against more than 5,000 political activists and for the immediate acquittal of the oil workers in Las Heras, among other measures.

We must prepare our own solutions

The government tried to stabilize the economic crisis that started in January by passing the burden onto the workers. It gave in to produce and grain exporters with the devaluation of the peso and launched a plan that combines austerity and recession to avoid an immediate and massive response and helped to contain panicky reaction around the money exchange. But nothing indicates that this can be sustained in long term. All the profound contradictions in matters of energy, transportation, external debt negotiations are still present. While the government and the PJ (Peronist Party) lose luster with these anti-worker and anti-popular policies, the rest of the politicians are preparing to take in. The UCR (Union Civica Radical), FAP and the alliance “UNEN” are planning to form a new alliance in remembrance to the one that took De la Rua to power. In the meantime, Sergio Massa and the Peronists in the opposition are not able to build a national party that could be an alternative to the government and the only proposal to the workers by this good friend of the American Embassy has been to postpone the salary negotiations, as if our basic needs and demands could be left for later. The Left and Workers Front, which represents the majority of the left in the country for its influence in elections and in the trade unions can use all its force to unite all combative sectors to further the fight to recover the trade unions from the bureaucratized leaderships, with the perspective of intervening in future crises, to have the workers use a general strike to impose its own solutions to the crisis. Our nation’s history has taught us that if the crisis is not met with an independent response by the working class, the pro-bosses politicians will use them to generate even more frustrations. We should mention how Alfonsin had to leave after the hyperinflation in 1989 just to be replaced by Menem and a decade of impoverishment and destruction of workers’ rights. The Argentine semi-colonial capitalism has a tendency to recurrent economic crisis and this end-of-cycle crisis under the Kirchnerism is not an exception, especially under a tired model and a worldwide crisis as backstage. We must prepare our own exit. The crisis must be paid by the capitalists!