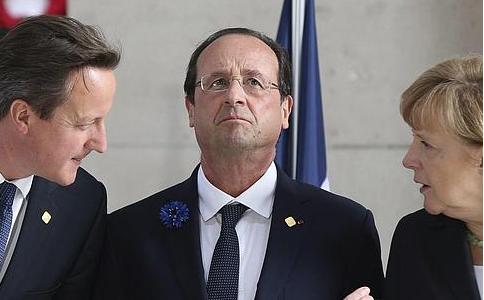 Using the climate of fear left by the attack

A reactionary European unity: Merkel, Cameron, Rajoy and Renzi are marching on Sunday in Paris

The heads of state of Germany (Angela Merkel), the United Kingdom (David Cameron), Spain (Mariano Rajoy), and Italy (Matteo Renzi) confirmed their participation this Sunday in the demonstration called by Hollande’s government, alongside of all the parties of the French regime, after the attack against the satirical weekly publication, "Charlie Hebdo." The United States will send a representative. Some hours before, a summit "against terrorism" will be carried out, with European Ministers and US representatives.

"It will be a big sign of the Franco-German friendship that unites us," German Chancellor Angela Merkel stated, and she added that she had personally confirmed her attendance to the President of France, François Hollande.

"The whole of Europe" is "on the side of France," Merkel continued, and she reiterated her condemnation of the "brutal attack" against Charlie Hebdo. The German Chancellor called for "raising one’s voice, when the values of democracy are being attacked."

Shortly afterwards, the British Prime Minister David Cameron, who from his Twitter account stated that he accepted Hollande’s invitation to participate in the united march, joined.

The Spanish Prime Minister, Mariano Rajoy, also joined the group. "I will be in Paris this Sunday supporting the French people. Spain with France against terrorism and for freedom," he also said from his Twitter account.

The leader of the ultra-rightist and xenophobic National Front, Marine Le Pen, complained about not having been invited to participate in the demonstration. After her visit yesterday to the Elysée Palace (seat of the French Presidency), she, angry, said, "I have not gotten from the President of the Republic the clear lifting of the prohibition against our movement, its elected representatives, that millions of French people were waiting to see us in the entourages," she, outraged, said. And she accused the Socialist Party and the UDI (a formation of the center-right with a social profile that formed part of Sarkozy’s Presidency) of having broken national unity (the UMP declared itself in favor of not prohibiting anyone from participating). Beyond this disagreement, it is a complete novelty that the National Front would be invited to the Elysée Palace by a President from the "left."

Nicolas Sarkozy, the former President and leader of the conservative Union for a Popular Movement (UMP), responded to Hollande’s appeal and joined the "national unity" atmosphere. "War has been declared on France, on her institutions, on the Republic, by barbarians that deny the very idea of civilization and the universal values of humanity," he maintained in a communiqué. "This tragic situation calls each one of us to respect the national unity that we owe the victims," he added.

Next Sunday’s demonstration, with the presence of all these heads of state, including the President of the European Council, Donald Tusk, will be an unprecedented event and will have an enormous world impact. A policy to show a big "Western front for democracy" and "against terrorism."

But those who speak in the name of "democracy" are the real state terrorists in Africa and the Middle East, the allies of the genocidal State of Israel. Those who strengthen the doctrine of the "War on Terror," devised by Bush against the peoples of the world and demonize millions of Muslims that live in poverty in the slums of Europe.

And they are also the ones that prohibit demonstrations in solidarity with Palestine or for Rémi Fraisse, like Hollande; those that in Italy, like Renzi, are promoting anti-worker labor reforms and persecuting the immigrants; those that are criminalizing protest, by promoting the "Gag Rule" in Spain, those who, like Angela Merkel, persecute the refugees in Germany. And all of them, those that have been using the austerity plans and cutbacks against the workers throughout Europe and voting for xenophobic laws against the immigrants that inhabit the outskirts of the big cities; [the immigrants] are harassed by the police in the poor neighborhoods and survive in an absolutely precarious situation or unemployment.

Facing the choice of "Civilization or barbarism" in the mouths of those daily responsible for the imperialist wars and the hunger of millions, the struggle is both against the extreme right and against the equally anti-immigrant, anti-worker and anti-popular "republican front."

The big problems that the exploited and oppressed masses of France and Europe are facing, will not have a fundamental solution without taking power from the exploiters.