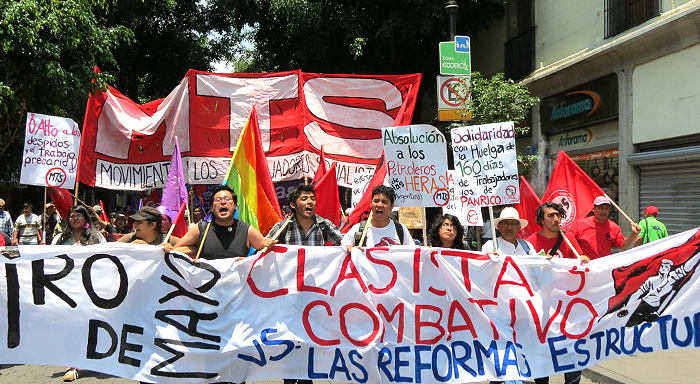 Mexico: A big victory A new leftist and socialist alternative is emerging in Mexico

This Wednesday, May 21, the General Council of the National Electoral Institute (INE) unanimously approved the application of the Socialist Workers Movement (MTS), a sister organization of the PTS, in Mexico, to get its registration as a National Political Group (APN). Securing the legal standing is the result of an intense, militant campaign that the previous Workers League for Socialism (LTS), together with workers, students, young people, women and sexual diversity activists, promoted in the streets, public squares, schools, industrial areas, workplaces, and we have now come together in this new alternative of the socialist and revolutionary left, the Socialist Workers Movement (MTS). During our entire campaign to obtain registration as an APN, we persevered and emphasized the existing antidemocratic and restrictive legislation, that prevents us workers from having a political representation of our own. For that reason, we supported the right of the organizations of workers and of the left (like the Political Organization of the People and the Workers, the OPT, that the Mexican Electricians Union [SME] is promoting), to be able to get full political rights.

We received the support and the solidarity of different cultural, human rights and intellectual personalities, who publicized their demand that the INE make a positive decision on our application for registration. Among the prominent people that supported us are the writer Paco Ignacio Taibo II, the social activist Norma Andrade, the journalist Carlos Fazio, the social activist Alejandro Solalinde, the union activist José Luis Hernández Ayala, Héctor Valadez for the National Political Council of the OPT, the activist against the telecommunications law Jesús Robles Maloof, and more than 8,000 signatures.

With this intense militant activity, our intervention in the most prominent struggles of the young people and the workers, and the conquest of legal standing, a new revolutionary organization has emerged in Mexico. An alternative of the workers, the young people, the students, the women, we that need our own political organization, independent of the parties that serve the bosses, like the PRI, the PAN and the PRD, that approved all the structural reforms (in energy, education, and labor), and to the left of political projects like the MORENA of López Obrador that, although they question some of the most anti-democratic aspects of the regime, do not propose an independent, anti-capitalist and revolutionary perspective to put an end to exploitation, oppression and repression from the regime.

Our registration as an APN will be at the service of the victory and development of the biggest workers’ and young people’s struggles of the country. And, at the same time, at the service of putting Trotskyism on the offensive in Mexico and an anti-capitalist, socialist and revolutionary alternative for all the exploited, oppressed people and those who have been wronged by this repressive and exploiting regime. We have big challenges ahead. The Socialist Workers Movement has the big challenge of expanding its influence to the vast national territory, from Chiapas to Sonora. On this road, we already have the adherence of nuclei of comrades in Sinaloa, Chihuahua, Oaxaca and Guerrero, but we want to go ever farther. Armed with a new periodical publication, the Tribuna Socialista, new electronic media and new tools of Marxist theory and politics, our goal is that winning legal status will be a lever to get stronger in the movement of workers and young people. It is a matter of setting up a socialist organization on a national level, that, in addition to intervening with revolutionary politics, facing the national and international reality, fighting tenaciously to defend all and every one of the democratic rights of the masses, will put all its efforts to forge within the Mexican workers’ movement, organized in the service sector, industry, construction, and precarious employment, a socialist alternative that will fight to overthrow the exploitation of man by man and class society. With the banners of Leon Trotsky, Lenin, Rosa Luxemburg, and all the revolutionary Marxists that form part of our legacy, our challenge is that socialism should again become real in very broad groups of the workers’ and young people’s vanguard in Mexico.