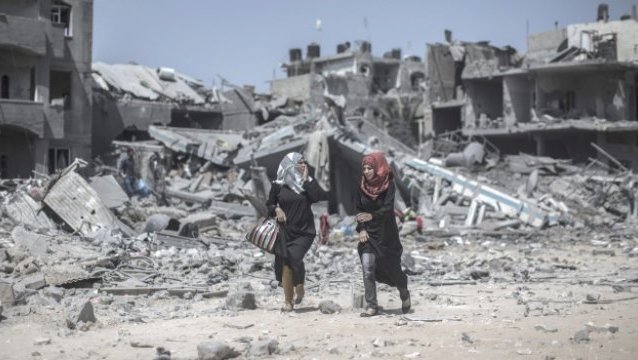 A Truce and an Israeli Withdrawal from the Gaza Strip

"Mission accomplished," said Israeli Prime Minister Benjamin Netanyahu, after announcing the withdrawal of Israeli troops from the Gaza Strip. It was almost 30 days of a military offensive that left a toll of 1900 dead, more than half, civilians, among whom are numbered more than 400 children, and 9,500 wounded (of whom, 2,500 are children), more than 10,000 dwellings destroyed, as well as basic infrastructure, like the only electrical power station, schools, hospitals (30% of which had to close because of the damages they experienced) and mosques.

The Zionist army announced that it neutralized the tunnels of Hamas and the Islamic Jihad, and that it significantly reduced the stock of operational rockets of those organizations. Although the latest surveys published indicate that Netanyahu’s popularity has fallen by between 15% and 20% in the most recent days, his reputation remains very high (above 65%). The criticisms from the Zionist ultra-right-wing, led by Chancellor Avigdor Lieberman, among others that were directly suggesting occupying the Gaza Strip militarily and toppling Hamas, are restrained after the announcement of the destruction of the tunnels and of what would be, as Netanyahu’s supporters present it, a significant weakening of Hamas, which had to accept the truce without getting, up to now, any of its demands, mainly the lifting of the blockade that Israel has kept since 2007 and that has been strengthened by Egypt since mid-2013).

In this way, the 72 hour truce, the withdrawal of the invading troops, and the cessation of the bombings, is presented by Netanyahu as a military and political victory.

However, Israel is paying a high political price: an extreme loss of international prestige and growing isolation from countries that, after weeks of bombings and aberrant war crimes, ended up withdrawing their Ambassadors from Israel (like several South American countries) or suspending the sale of arms (like Spain). They are not more than token or symbolic measures. Except for the Bolivian government, no country broke relations with the Zionist state nor suspended its commercial ties. On the contrary, all their criticisms and repudiations are based on the "disproportion" of Israel’s response, or on demanding the "protection" of civilians.

The UN, that condemned Israel for having bombed schools and shelters that were under its control, as "possible" war crimes, was on the same wave length, but it failed to take any concrete measure to stop the invasion and demanded a ceasefire equally from Hamas and Israel, following a logic of "two demons" that made things easier for the invader. But, although they do not go beyond speeches or symbolic measures, they are the expression of the loss of legitimation and the international isolation, in which Israel remains, with the systematic policy of ethnic cleansing, that it uses against the Palestinian people, being laid bare with all severity. In the Arab world, hundreds of thousands got mobilized, even against their own governments, that hardly met to repudiate the Zionist aggression in words. In Western countries, like England and France, big protests also took place, facing even prohibition, in the case of Hollande’s government.

Even the protector and unconditional ally of the Zionist state, the US, at the same time that it gave an extra item of 250 million dollars to strengthen the Iron Dome, the Israeli anti-missile system, and whose "unbreakable" bond with Israel and the Zionist lobby in the US, Obama reaffirmed, had to describe some of the most brutal war crimes of the bloody military offensive as "atrocious." Israel’s other big ally in the West, the United Kingdom, ended up with a shock in the government with the resignation of the Foreign Office Minister, Sayeeda Warsi. His turn of phrase will no doubt be more elegant.

The limits of the military offensive

Apart from that, although Hamas received a hard military blow, it managed to survive. And this becomes much more obvious in the context of the weakness that it had been suffering after the loss of support from Iran (as soon as Hamas backed the revolt against al-Assad in Syria) and from Egypt (after General al-Sisi’s coup removed Hamas’ allies in the Muslim Brotherhood from power). Despite this situation, Hamas resisted Israel’s siege for almost a month and even managed to inflict considerable casualties on Israel, including several officers and elite troops, and to reach Israel’s biggest cities with its precarious rockets, which, for example, led to closing the Tel Aviv airport for some days. It will have to be seen how far its operational ability has been affected, but all the media agree in estimating the rockets that it keeps operational at about 3,000. While Israel says it has killed almost a thousand combatants, Hamas alone has about 20,000, and the majority of the organization’s leadership came out of the offensive unharmed. From the political point of view, Hamas appeared strengthened among the Palestinian population, as the only tool for self-defense from the bombings and from the Zionist invasion.

On the West Bank, tens of thousands courageously went out to the streets and confronted the Israeli army with rocks, with a toll of a dozen dead, and tens of wounded and arrested. President Mahmoud Abbas, leader of Al Fatah, that governs the West Bank, should have repudiated Israel’s offensive and given his support to Hamas, even though he criticized the use of the only defensive weapon Hamas has, the launch of the primitive missiles against Israeli territory (they caused 3 casualties), reaffirming, in that way, his openly collaborationist policy with the occupier and its imperialist allies.

Negotiation in Egypt and political consequences of the attack on Gaza

But perhaps Hamas’ biggest political victory is having managed to be part of the negotiations that are taking place in the Egyptian capital, Cairo. Considered by the imperialist powers and by Israel as a "terrorist organization," it does not negotiate, except through the Palestine Liberation Organization, led by Al Fatah, or through allied Arab governments, as Egypt was in 2012 (when the Muslim Brotherhood was governing) or, most recently, through Qatar and Turkey. Being accepted as an interlocutor is a political victory, although at a high price.

In the coming days and weeks, the political consequences of this new Israeli military offensive will appear more clearly, with the progress of the negotiations and the concessions that each group will promise to make. But it is going to be a difficult task for Netanyahu’s Zionist government to try to transform military advantage into a political victory, and, at the same time, it will have to contend with extremely strong pressure from the Zionist ultra-right-wing, that has been strengthened in the heat of the most recent offensive and is not willing to make any type of concession.

As we have indicated in different notes in this paper, the historic aim of Zionism that the State of Israel is running, is to impose a Jewish state on the entire historical Palestinian territory, based on ethnic cleansing and state terrorism. For that reason, any "two-state" (Israel and a Palestinian state) strategy is utopian and reactionary, and only serves to strengthen the Zionists’ position. Arabs and Jews will only be able to live together peacefully, as they did before the artificial creation of the State of Israel in 1948, in a secular and socialist Palestine on all its historical territory.