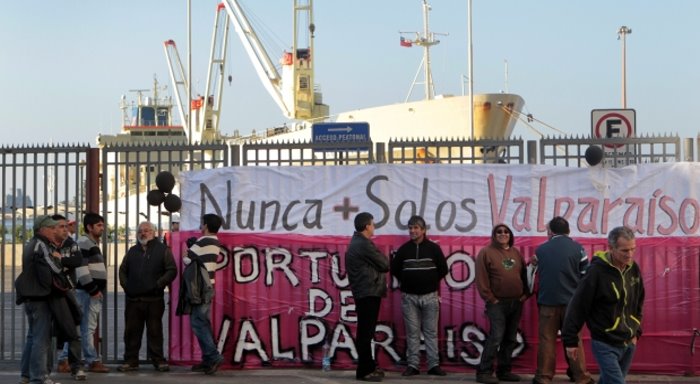 Thirty days ago workers at the port of Angamos, in Mejillones, in the north of the country, began a heroic strike for the recognition rights of temporary workers (“eventuales”), who are excluded by law from agreements between the employer and the union. Fifteen days ago, workers at the port of San Antonio, on Chile’s central coast, joined the strike. They are demanding full back pay from 2005 to 2013 for their half hour meal break (“colación”), a right they finally won in 2013 but the company still does not recognize. The strikers’ just demands have unleashed a flood of solidarity stoppages by workers in other ports in the north and south of the country. The stubbornness of the stevedoring bosses, that now counts on the support of the State and its repression and intimidation of the workers, has been met with the determination of the dockworkers, the sympathy of other sectors of workers and important support from sectors of youth, such as the university students who have taken part in years of struggle for free, quality public education. The strength of this strike from one of the fundamental battalions of the Chilean proletariat has stopped the bourgeois stevedores, mine operators and fruit and other exporters in their tracks; the combativity of the dockworkers has tended to overcome the limits imposed by the bureaucratic union leaderships, even though they have been able to so far ignore the strikers’ central demands, such as the recognition of the “eventuales” in Mejillones. The State has been forced to intervene and call for a round of negotiations, having to give recognition to strikes that have been deemed illegal by the pro-employer justice system. At the close of this edition, negotiations have fallen through due to the refusal of the stevedoring bosses to negotiate with the strikers. The bosses are insisting on the illegal character of the strikes and demanding that they end before any talks begin. We reproduce below the statement, written before this new display of intransigence by the port bosses, from our comrades of the PTR, who have actively intervened in the conflict. For coverage of this important struggle, visit www.prt.cl

On Wednesday 22, the Labour Ministry held a tripartite roundtable meeting with the Government, the leaders of the Unión Portuaria (Dockworkers’ Union) and the bosses. The Government, which had previously refused to summon such a meeting, has relented in the face of the strength of the strikes - 18 paralyzed ports, shut down for 30 days in the case of Mejillones and for more than 15 days in San Antonio and the rest of the ports.

They want the workers to negotiate on their knees

That afternoon, the bosses announced that they would break off talks: “As a country we cannot allow a small group of people to give validity to the use of such pressure to impose their demands”, they declared. But the workers are maintaining their strikes and their mobilizations. With this strength, they have forced their way to the negotiating table.

But now the bosses are hardening their stance, for they cannot reach their goal without imposing a de facto state of siege in the ports to break the strike, and they have not achieved this yet. But that is what they want to go for.

The Triple Alliance against the workers: the boss class closes ranks

First of all the Government, which has already sent in the Special Forces to repress the dockworkers, now persecutes them with legal actions, criminalization, threats and blackmail.

Second, the owners and bosses, grouped in their associations such as the Society for Industry Development (SOFAFA) and the Confederation of Production and Commerce (CPC), complained at the start of the meeting that all the meeting would do is “legitimize” the strike.

Their media describe the situation as a “no man’s land” and demand an end to the stoppage. They try to turn public opinion against the workers and create a climate that is against this legitimate strike.

They are closing ranks to move to a new attack.

The workers need to redouble their forces.

Unite the ranks of the working class

This is the time to demand that the CUT [Central Unitaria de Trabajadores de Chile, the main Chilean union federation], the national union federations and union branches, take a step forward to unity in struggle. Leaving aside our differences, we must come together under the banners of the dockworkers’ strike, their just demands, and for the repeal of the Labour Code of the dictatorship that is still in force.

The CUT leadership until now has not lifted a finger. It must call for a National Strike Committee open to union branches, assembly delegates, student and popular organizations, and the left.

In Antofagasta, the strike camp should send delegates to the regional CUT, the Miners’ Federation, the Copper Workers’ Confederation (CTC) and all the unions of Codelco [the state owned copper mining company], the public sector and other industries, and call for a meeting of leaders that convenes an open Regional Strike Committee that completely shuts down the region, as a first step towards a national stoppage of all the working class.

For the unity of the working class under the banners of the dockworkers’ strike!

For full back pay, no negotiation without the “eventuales”!

Down with the Labour Code of the dictatorship!

For the establishment of an open National Strike Committee!

For a stoppage of all workers in the Antofagasta region, as a first step towards a national stoppage of the working class!